[SEAFOOD SOURCE] Even as the COVID-19 pandemic upended markets, forced restaurant closures, and changed the way society functioned, the seafood industry managed to see significant gains in the category.

IRI data, combined with NPD data, shared during a panel that is part of the National Fisheries Institute’s Global Seafood Marketing Conference webinar series, indicates that the seafood industry saw net growth of 7 percent in 2020, equaling USD 800 million (EUR 657 million) in gains for the industry. SeafoodSource is providing exclusive coverage of the GSMC Webinar series, which will be providing comprehensive market content throughout 2021.

The real hero for the seafood category was retail, with certain seafood types seeing huge bumps in sales.

“If you look at that, they’re pretty pricey ticket items,” Seidel said.

“For years, tilapia has headed in a decline, so for retail it’s done really well,” Seidel said.

Frozen seafood overall saw massive gains in retail, with almost every four-week period selling far more than even during peak times in previous years. Nielsen data indicates that frozen seafood averaged USD 534 million (EUR 439 million) in sales during every four-week period after the first lockdowns went into place in the U.S. That average was higher than even the largest sales spikes in 2019.

The largest increase in sales happened just after the initial nationwide lockdown in the spring, with seafood sales over a four-week period totaling roughly USD 650 million (EUR 534 million) in March.

On a four-week basis, shrimp sales also saw huge increases after the pandemic lockdowns went onto effect. The average sales of shrimp over four-week spans in 2020 was USD 288 million (EUR 236 million). That average, too, was higher than most peak sales in 2019, with only the holiday season coming close.

The good retail news was tempered by drops in foodservice. Sales of fish and shellfish in the foodservice sector dropped significantly. In 2019, foodservice and retail seafood sales both represented almost exactly 50 percent of sales overall. However, in 2020, that shifted dramatically in favor of retail: Retail sales represented 64 percent of frozen shellfish and finfish sales, while foodservice only represented 36 percent.

The largest losers, according to the data, were lodging and casino-based foodservice enterprises, which saw overall sales – of all food – drop 50 percent. Colleges and universities, as well, saw drops of 44 percent, and business and industry foodservice saw drops of 43 percent.

It wasn’t all doom and gloom for seafood in foodservice, however. Some segments, such as quick-serve seafood, managed to eke out good years. Quick-service seafood saw gains of 19 percent, and quick-serve burger chains saw 11 percent growth in seafood sales. The largest gains were in global cuisine (a category that does not include Mexican/Hispanic- or Asian-focused restaurants), which saw sales growth of 22 percent.

Overall, the foodservice industry took a heavy hit, with thousands of restaurants across the country closing for good. However, Seidel predicted that once things return to a state of relative normalcy, foodservice will come back strong.

GRILLED PANGASIUS KABAYAKI – Fish is glazed with amazing sweet and savory flavor of Kabayaki sauce. It is tender, flaky, and delicious down to the last bite. 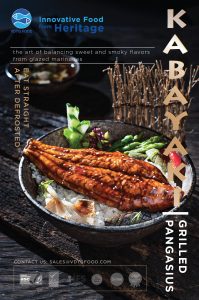